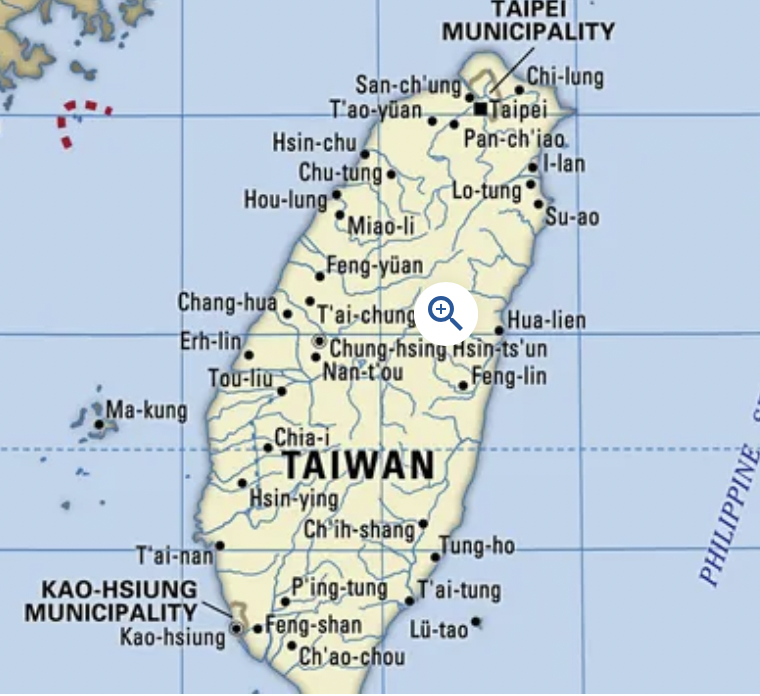 Ive always kept an eye on Taiwan. Having been stationed there in the military in the 70s it was always a formidable memory. Later, in college, I was involved in working with the USDA and international trade as it related to the Pacific Rim nations working with Taiwan. Heck, even one of my kids was born there while stationed. Ya, I have a history with the place. Both fond, and not so fond memories.

I have mixed feelings as to their ability to defend themselves. When I say they, there are actually two Taiwans, or at least two that I saw.

The government was incredibly efficient. When they wanted something…..it happened. I was Military Police and, one of my jobs was to liaison with the local police department in Taichung. A fairly large city in the center of the island.

I could tell you horror, no actual horror, stories about what I saw. Let is suffice to say that when the police wanted information…they got it. Crime wasn’t all that much of a problem.

The beaches were fortified, you couldn’t get anywhere near them. Young men were in the service and worked along side us in their own military. All with sub standard equipment and an air of not caring all that much. The threat of the Chinese was everywhere. Even back then. However, you just didn’t feel that anyone other than us US military personal were serious.

The other Taiwan was one of complete poverty and despair. Imagine a two foot ditch running through the center of your town. Not some backwater rural village, but major urban city. That ditch is your bathroom, laundry facility, a place to wash up, brush your teeth. Everything. Young girls were sold to the various off base houses for prostitution. Sold by their fathers from rural communities down island. It gets worse, but you get my point.

Children, well mostly little girls, could be bought at what would pass as “orphanages” but they weren’t really orphanages. Fathers in rural areas would sell the babies, as little girls were pretty much worthless. One guy I knew adopted one and I remember him coming over to my house a few weeks before he rotated back to the states and offered to sell me one he adopted for $100.00. I could have haggled him down. His wife left him and he didn’t want her anymore. The US embassy there was throwing passports out right and left. Show up with a letter from a lawyer, $50.00, a little kid……you got a passport. It was quite a racket.

One of my jobs for about six months was to take a list of diseased prostitutes from the base hospital and deliver it to local police. I would then accompany the police while the girls were rounded up. This was quite dangerous, and I bear the scars from being stabbed by pimps to this day. The girls rounded up were taken here and there used for this and that. I honestly can’t write about it here. Its that bad.

Life was cheap, it didn’t have the same meaning you probably ascribe to it. Things may have changed somewhat, I really don’t have any idea. In my opinion, it wasn’t all that long ago.

The country was so illiterate that doctors would put up giant pictures of what they specialized in treating on the street. “Oh look, a giant lump on a neck, I have one of those”. It is hard for us to imagine such poverty and an illiterate population, but we live in a bubble. The reality of the world outside of it is quite different.

I think at the time I was making about $400 a month or something like that. I was rich in Taiwan. Stinking rich.

Now, things may have changed a bit. Its been a few years. So hold your letters. But…..but…..the Taiwan I saw was no where near ready or willing to defend itself. Sure, their military would put up something of an initial fight. They don’t have the equipment to do all that much. Have things changed in the last few decades from what I saw? Enough to allow them to stand up to the Chinese onslaught heading their way?

What we are watching in Ukraine can be broken down into will. The people there, corrupt as they are, do have the will to fight. The Taiwan I saw was a beautiful place and the people, for the most part, nice people. But the will to fight? I didn’t see it. It was all about eating and having a place to sleep and being safe.

Biden said yesterday in Japan that we would get involved military wise should the Chinese invade. If this happens, in my opinion, it will be us doing the fighting.